Electric Shuffle delivers a contemporary, experiential reimagining of the classic game of shuffleboard within a beautifully designed, conceptual space. The 9,000 sqft venue in the heart of Canary Wharf, is set over two floors and comprises 10 Play Spaces and two bars.

As part of the brief, the game of shuffleboard has been redesigned and ‘electrified’, therefore the Studio took inspiration from the pioneers of electrical technology, in particular the work of Nikola Tesla. The Studio created an interior which fuses references of the past and, entwines them with cutting edge gaming technology to form an engaging and original, contemporary, multi-layered scheme.

The fusion of these ideas manifested in a design scheme we describe as the ‘beautiful factory’. The idea is to celebrate the beauty in utility and reimagine and celebrate the industrial/Deco inspired aesthetic with a nod to the genius of Tesla.

The essence of the interior design is a blend of both the glamour of the Art Deco period of 1940s Palm Springs fused with the grandeur and faded elegance of early 20th century power plants and factories. The factory- inspired aesthetic is both utilitarian and industrial, yet implicitly beautiful and works as a perfect counterpoint to the opulence of the Deco inspired elements.

The custom designed shuffleboard tables have been completely re-envisioned by the Studio to form a central focus as social hubs within the scheme. The materials and lighting have been carefully calibrated to not only showcase the table as a key design feature but also seamlessly integrate the gaming technology requirements. The table design is inspired by the aesthetic of the grand Art Deco ocean liners. Curvilinear forms in the timber and decorative copper pipework reinforce this aesthetic along with inlaid copper details, leather upholstered detailing and laser cut metal elements, which bring together a mix of classic and contemporary, Art Deco and industrial.

The main bar on the ground floor is a dramatic double height, power plant-inspired design and pays homage to both the 1940’s factory aesthetic and the early designs of electrical transmission experiments. The large central bespoke rotating light feature which dominates the centre of the double height void space at the main bar is suggestive of an electrical turbine and the copper accented fluted timber detailing creates the illusion of innumerable copper tubes conducting wiring to ‘power’ the venue. Featuring a custom-made ceramic bull nosed top and bespoke fluted porcelain tiles, the bar front includes industrial-inspired strapping and rivet detailing and incorporates back-lit glass blocks, typical of aspects found in mid-century Bauhaus factories.

The central light feature was developed in conjunction with specialist lighting designers to create the illusion of simultaneous clockwise & counterclockwise rotation, a movement reminiscent of mechanical cogs. The bar also features custom-designed, pylon-inspired lights suspended in the double height void.

The first-floor bar features a contemporary re-interpretation of utilitarian metal factory panelling rendered in vivid electric blue, which has been overlaid with embellished meshes and bespoke bronze domes, in a pattern reminiscent of electrical circuitry. The studio has commissioned artisan ceramicists to create oversized decorative domed ‘rivet’ features and bespoke mid-century inspired lighting for the columns which flank the bar.

The radial first-floor wall light feature is intended as a digital re-imagination of the ground floor ‘turbine’ light feature.

A further reference to the industrial/electrical inspiration is the custom designed ‘Control Panel’ feature wall, which has been designed with ‘sound-to-light’ activation and vintage inspired buttons & dials. The idea is for the venue to feel as if it’s ‘alive’ and ‘powered up’.

Key elements of the lighting were custom designed by the Studio. The table lighting was created to be suggestive of electrical components, and the lighting in the double height staircase space is inspired by the forms of ceramic electrical resisters.

The hand painted wall finishes on the ground floor walls evoke a sense of movement and lustre; the pattern is suggestive of patinated, rusted metals and the beauty of polychromatic swirling oil slicks. The inspiration for the walls on the first floor came from the unexpected delicate beauty of mould blooms and the faded striations of watermarks.

Each individual element of the scheme has been carefully considered by the Studio, bringing together the lustre of the Art Deco, the beautiful utility of early power station and factory design and the unexpected beauty of aged metals, whilst also paying homage to the pioneers of electrical technology and it’s transformative, modernising effect on the reinvented game of Electric Shuffle. The spirit of the design has been forged from these diverse influences producing a scheme which is vibrant, contemporary, unique and electric. 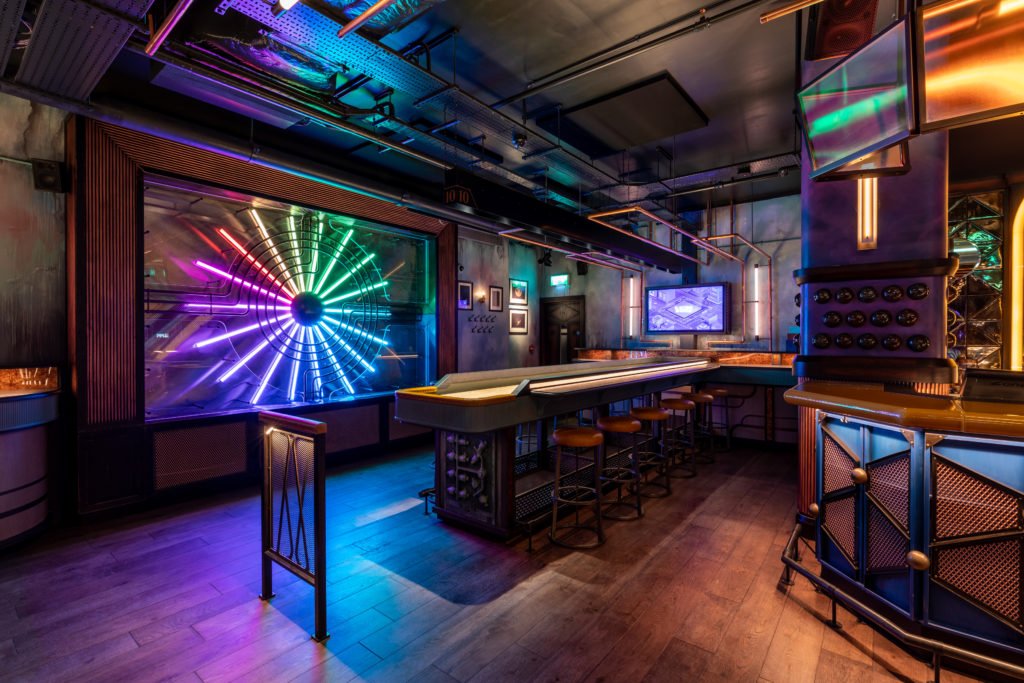 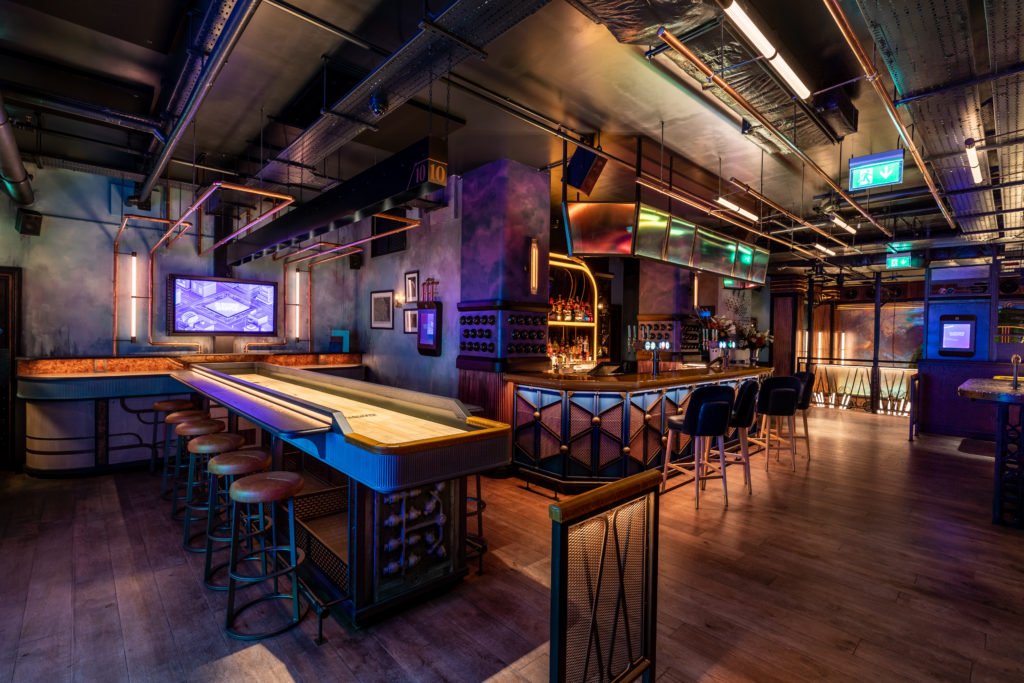 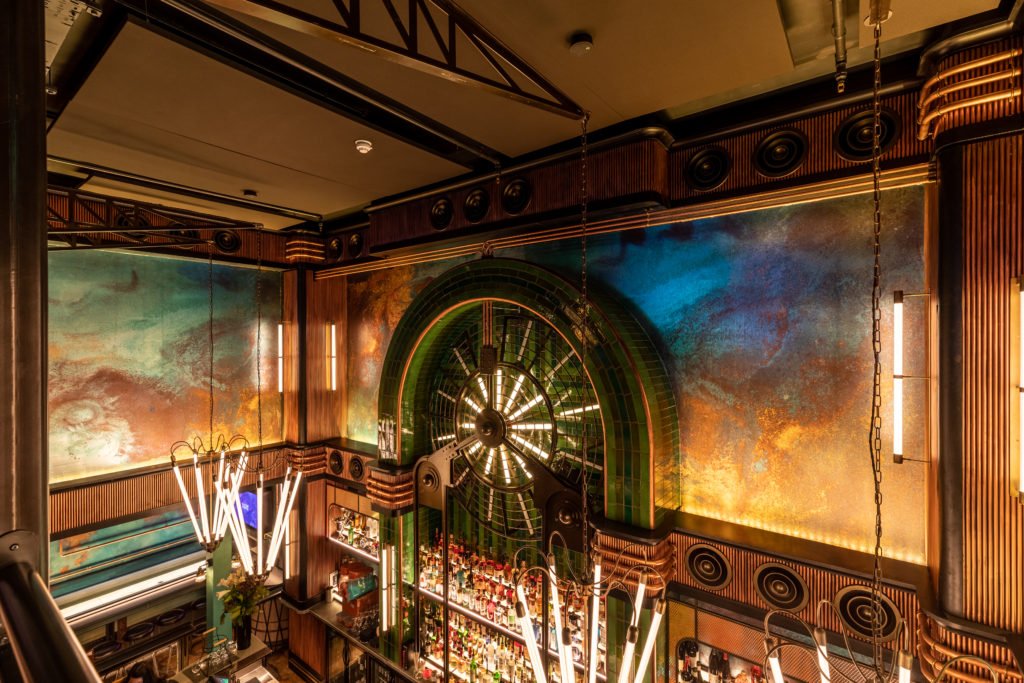 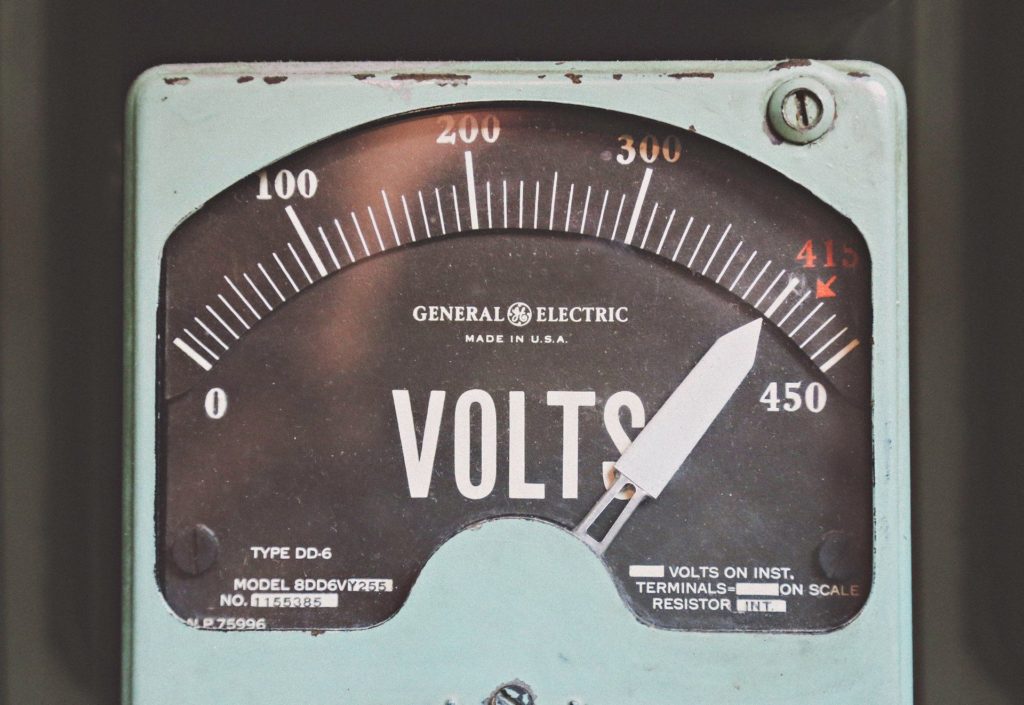 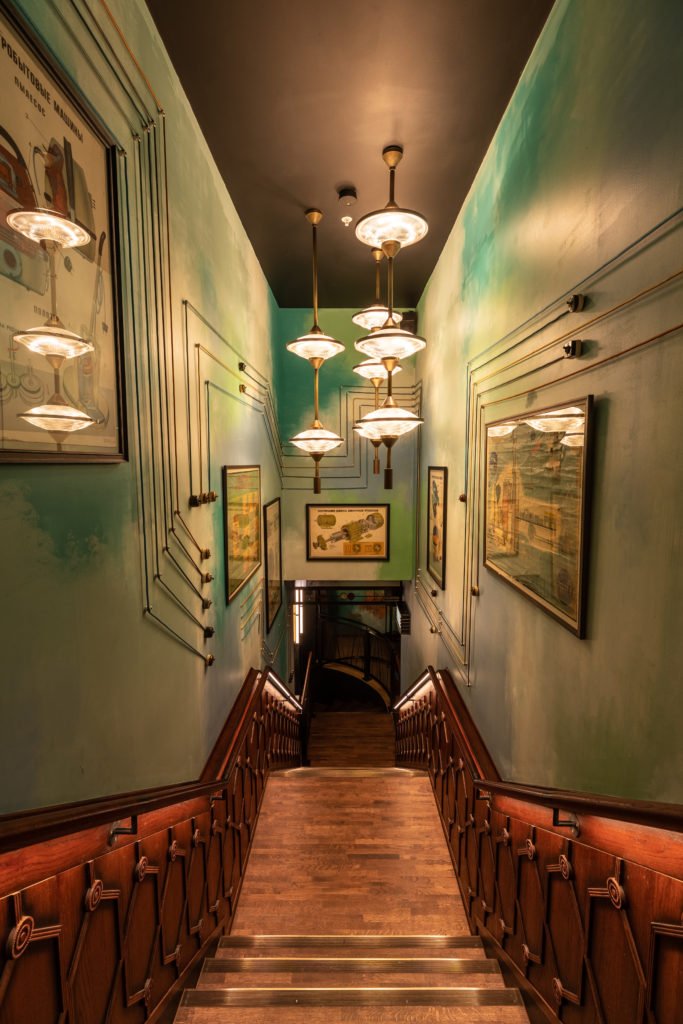 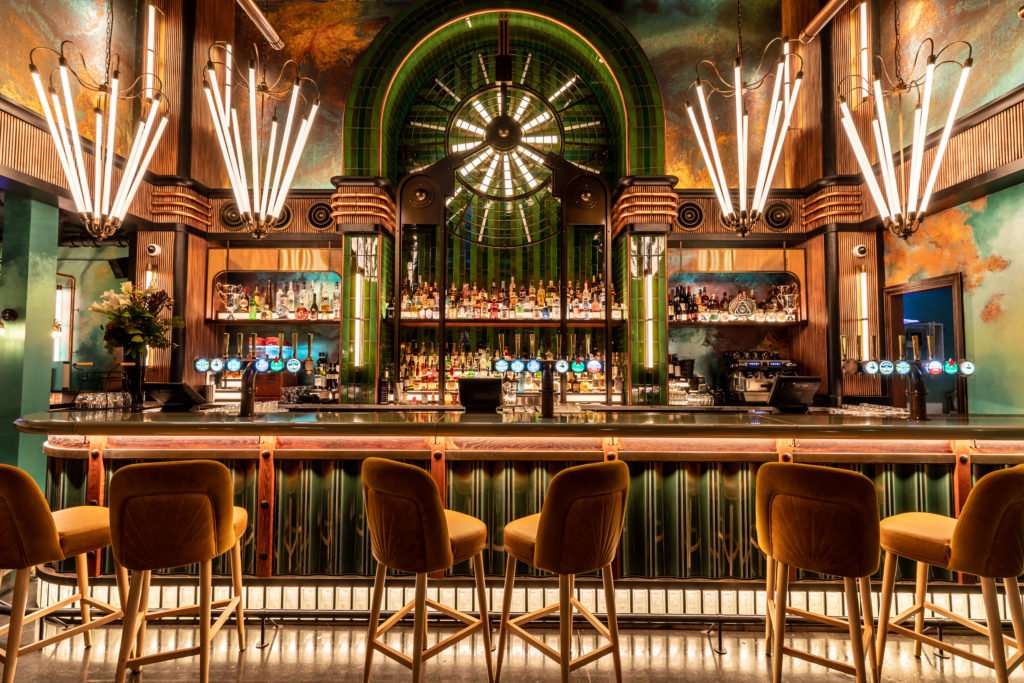 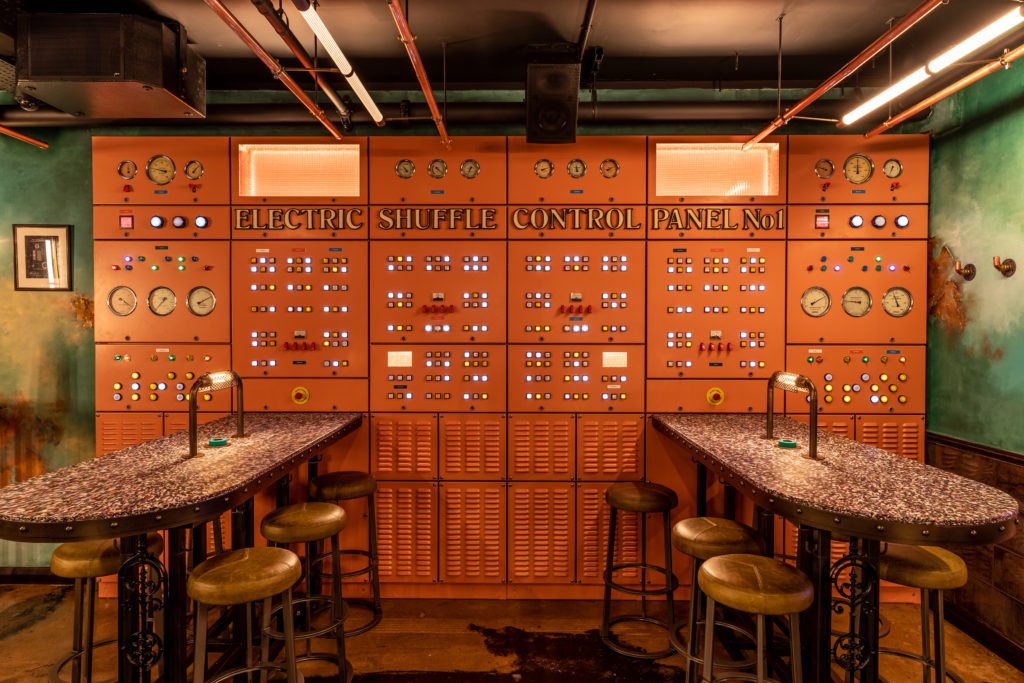 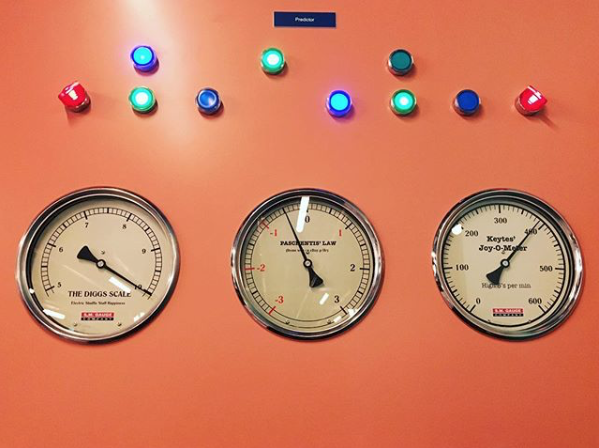 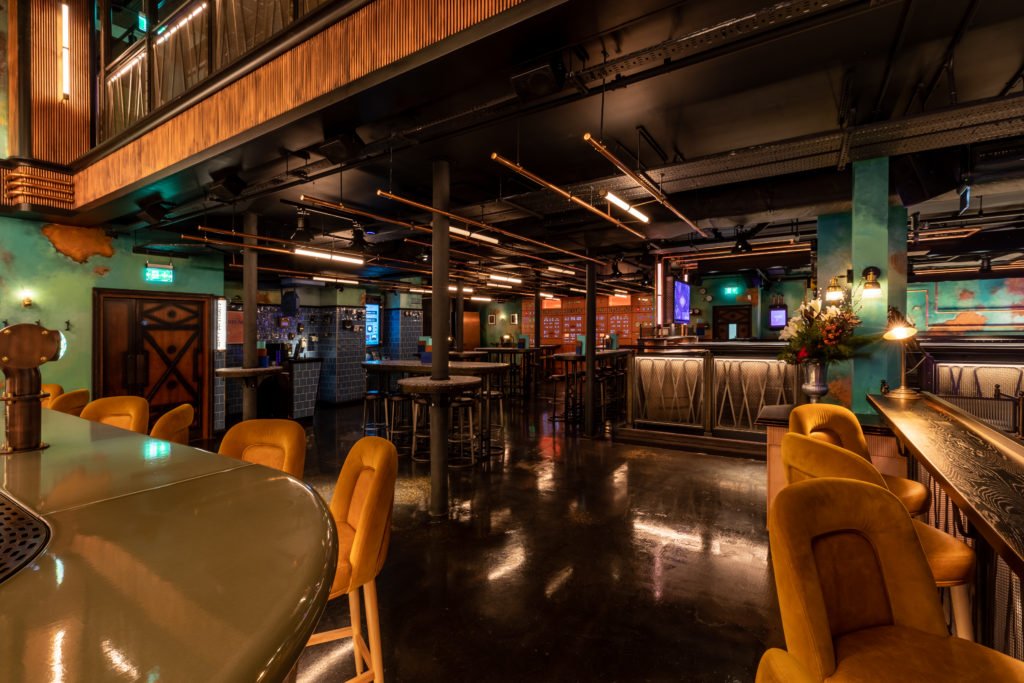 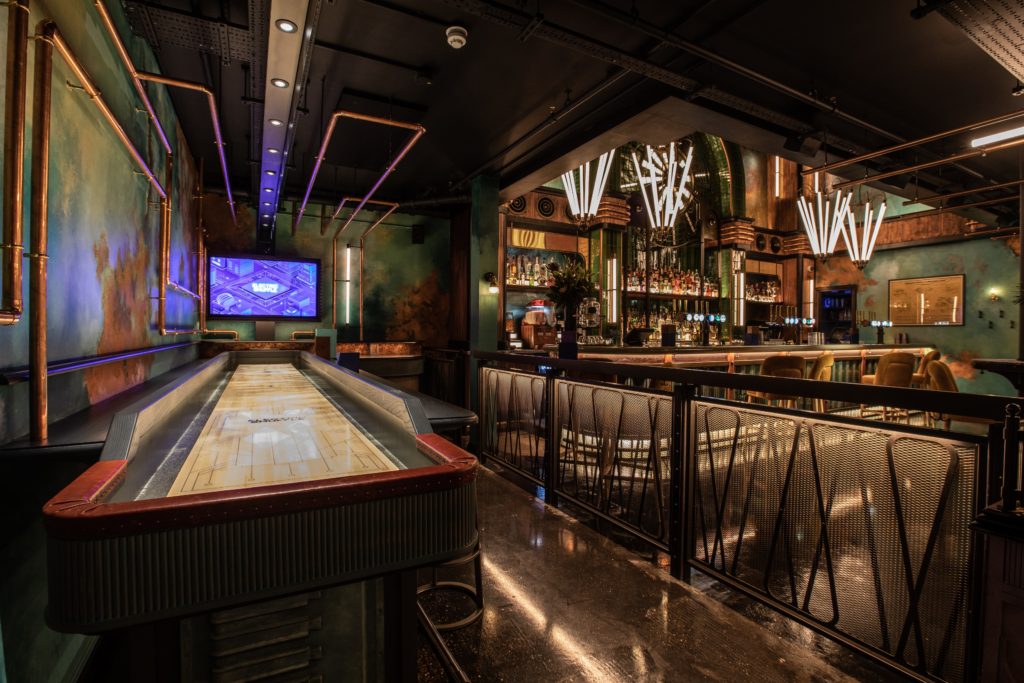 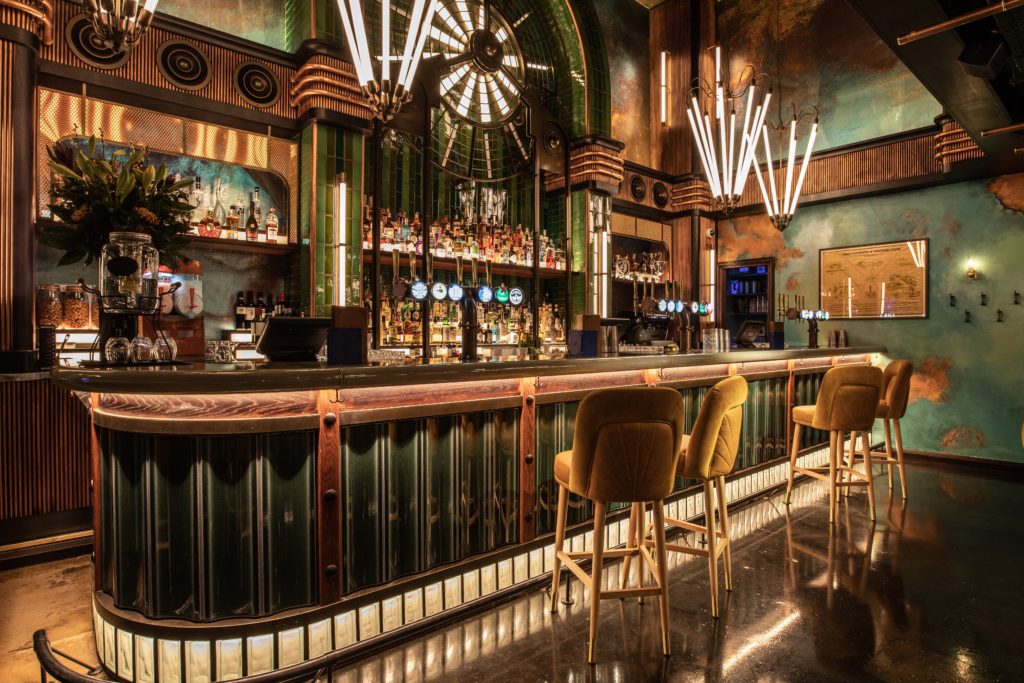 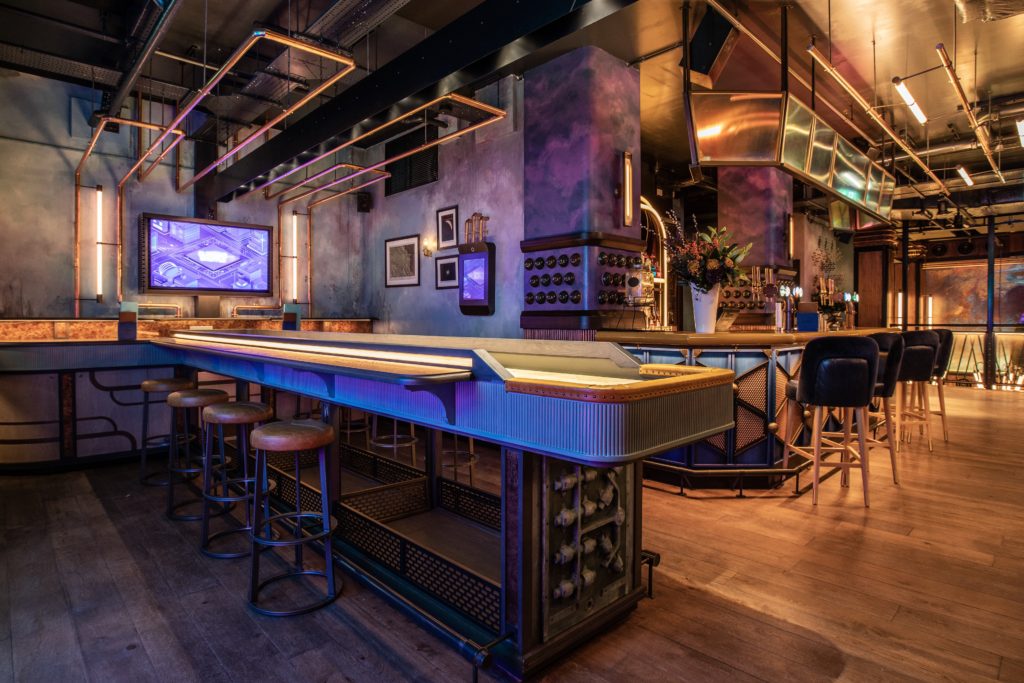 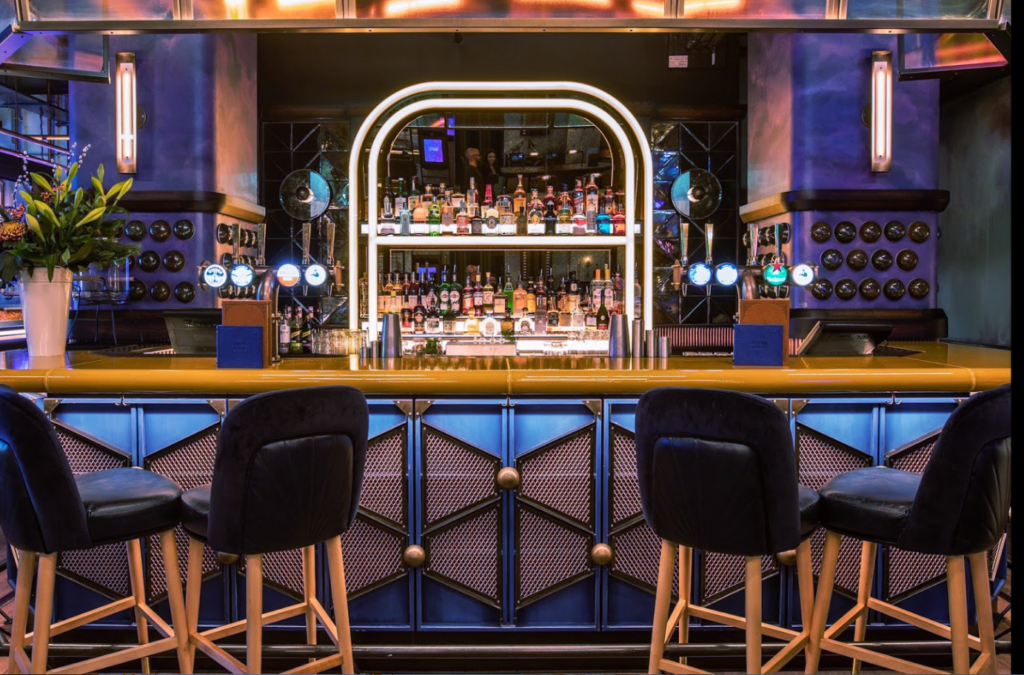 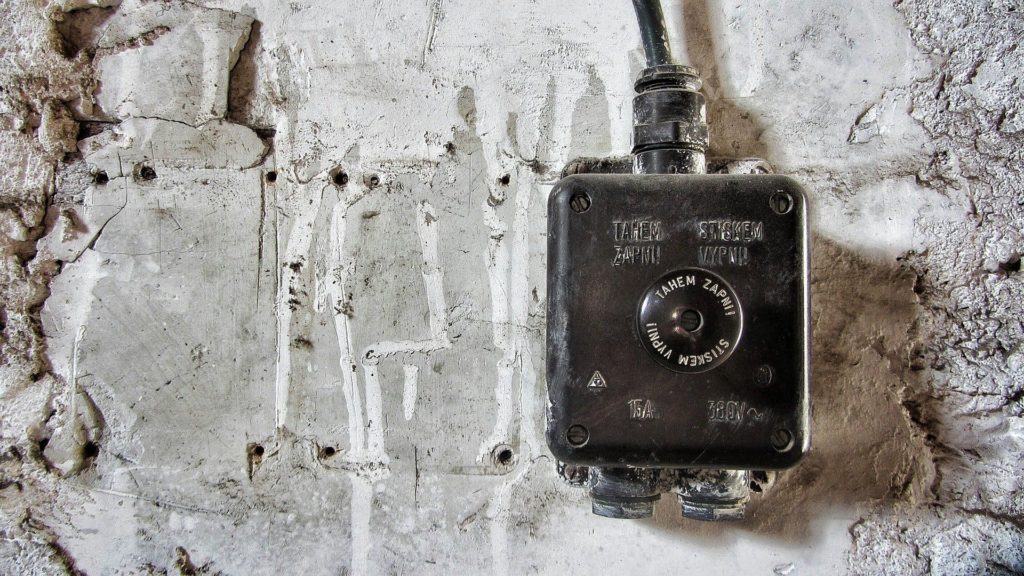 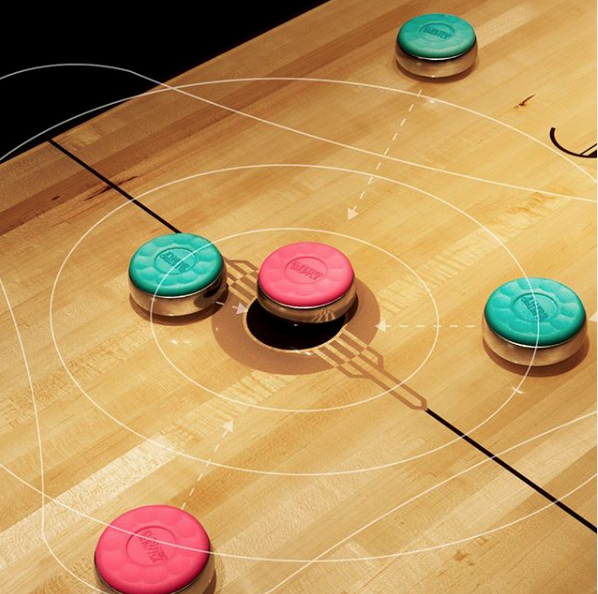 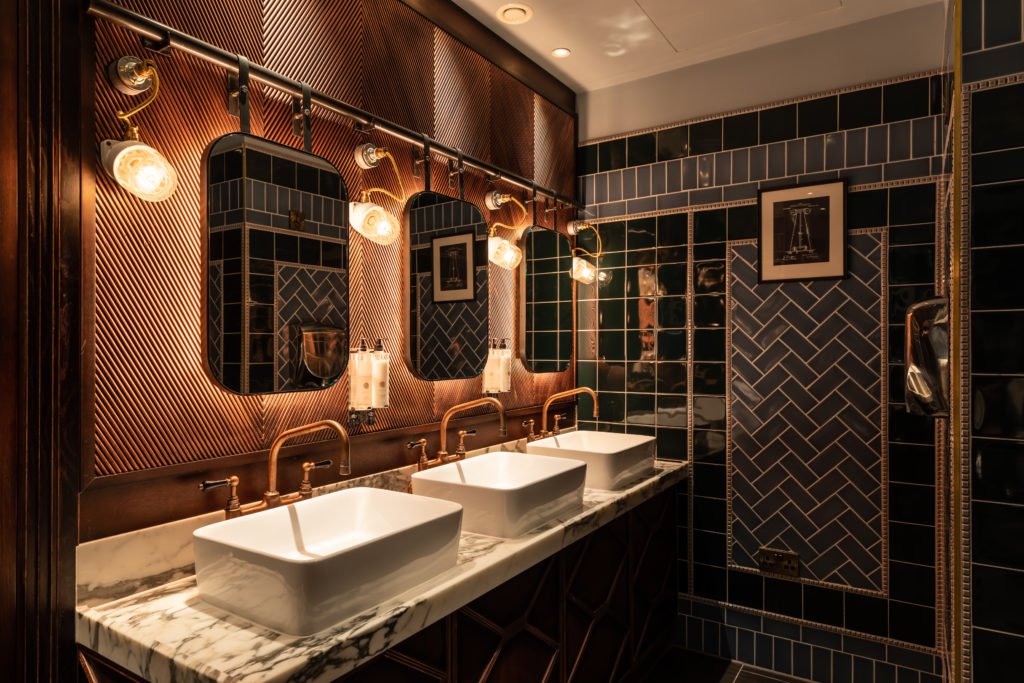 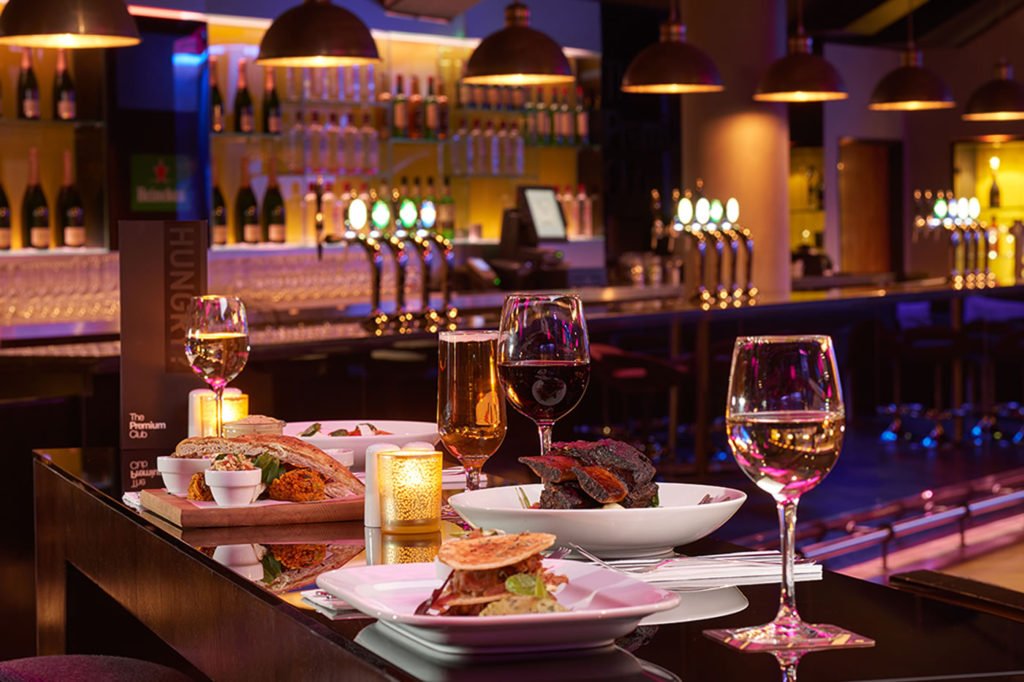 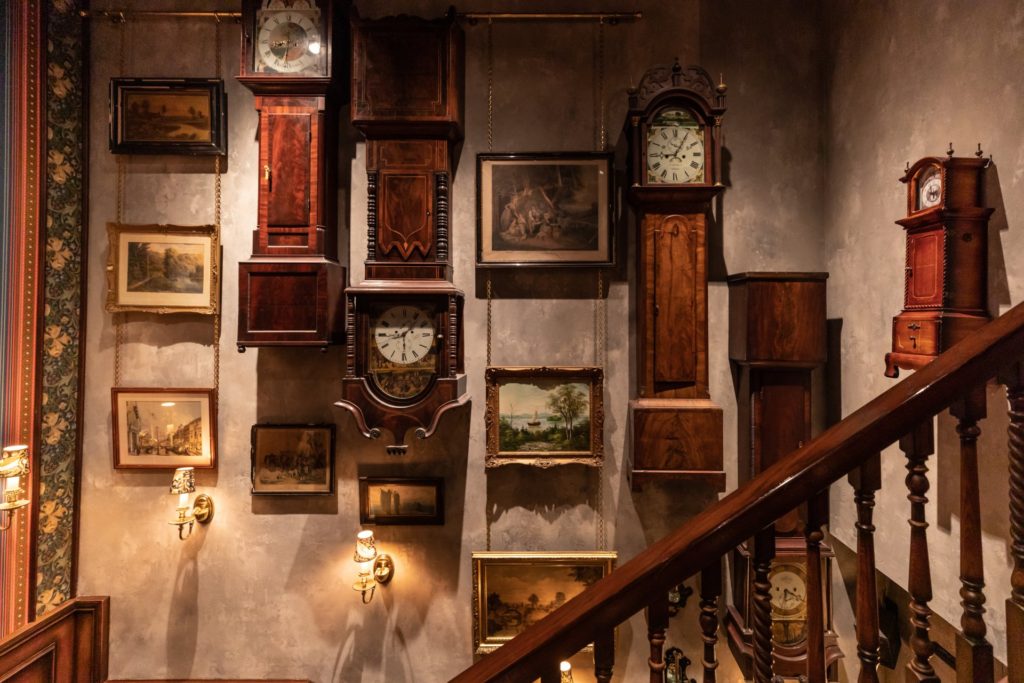 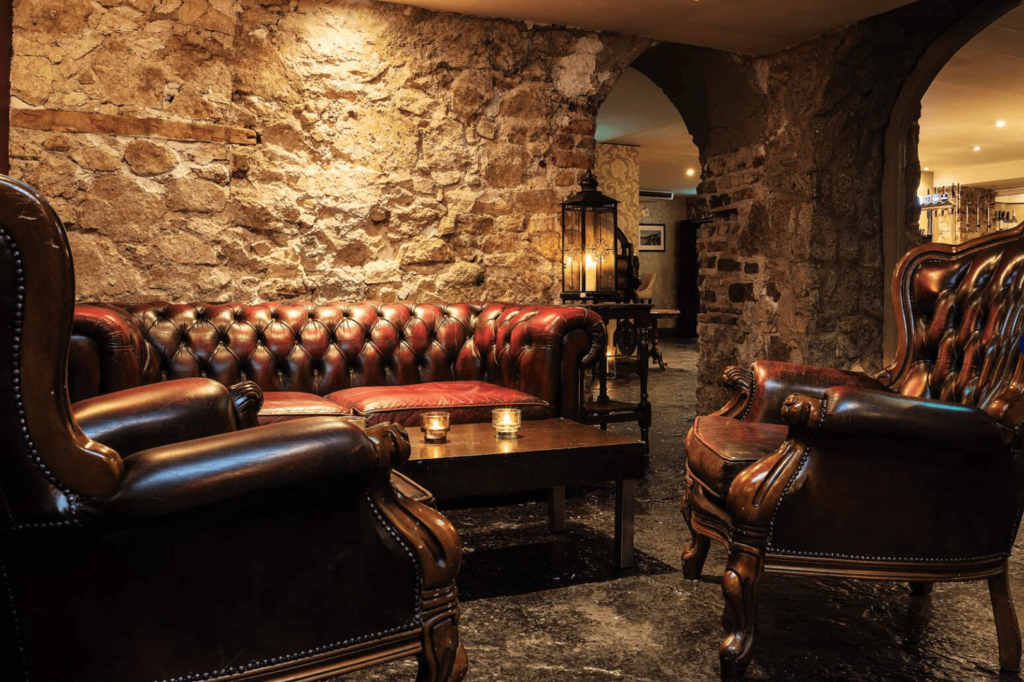